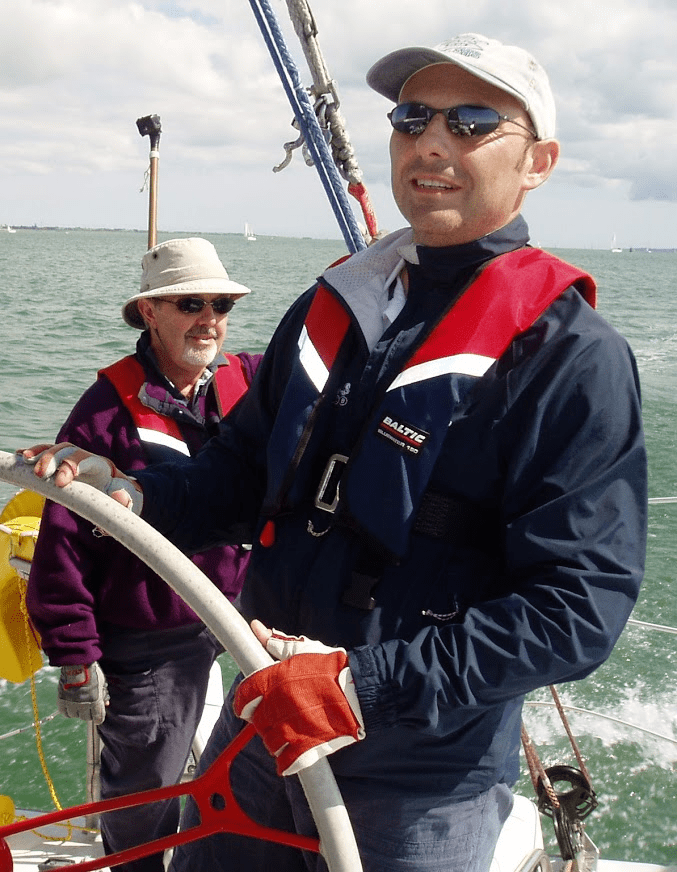 Jonathan said: “I still recall going to watch the start from the Green at Cowes and the feeling of excitement and worry, after all this was my Dad, my hero, the man who taught me how to sail, heading off into a race that 2 years before had taken the lives of 15 sailors.”

“My Dad is still my hero and if, by my following in his footsteps, I can help raise the money his care home needs to provide equipment to help enrich his life, and those of all the residents, it is a challenge I am happy to take on.”

“Fast forward 40 years and my Dad now lives in a care home in Winchester with Lewy Body Dementia – the same form that led to the death of the actor Robin Williams. St Cross Grange specialises in dementia care.”
He wanted to race just as his dad Paul did 40 years ago on a UFO 31 yacht called ‘The Happy Return.’
Seen by many veterans as a number of smaller races encompassed by one big race, it has played a large role in the growth of offshore racing and it certainly challenges all of a sailors’ physical and mental skills.
From Cowes, around 300 boats pass the Needles, heading along the southern coast of England towards the Lizard then around the tip of Land’s End. From there, the boats will head north through Celtic Sea waters towards the Fastnet Rock on the southern tip of Ireland. Once around the Rock, they will head back southwards, round the Scilly Isles then south east across the English Channel towards Cherbourg.

During the race, sailors can face strong tidal flows, Traffic Separation Schemes and changeable weather, from gales to light winds, in their bid to win the race. The participants need to be prepared for anything.
The money raised will go towards purchasing a Tovertafel (Magic Table in Dutch) for the residents at St Cross Grange care home. It is an £7,000 piece of equipment that was developed for people in the moderate to severe stages of dementia.

“I will be sailing with Germaine Williams and the team at Sail Racing Academy out of Hamble, and they have generously offered to assist in the fund raising during this Fastnet Cycle.”
Training starts 5th June, the race takes place 8th Aug.